Last fall, way before the mainstream media gave more coverage to Nouriel Roubini (below left) and Jim Cramer, I warned folks that both of these prognosticators got far more wrong than they were claiming. 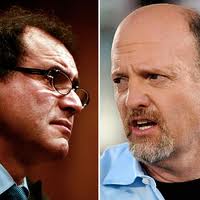 Now, the two are going after each other. Read this AP article for a good chuckle or two.

"Roubini made the comments before appearing with bank analyst Meredith Whitney and Canadian bears Ian Gordon and Eric Sprott at a Toronto event titled 'A Night with the Bears.' They all correctly predicted the current financial meltdown."

Oh really? According to whom? Oh, that's right - they claim they predicted exactly what happened last year!

And, for good measure, the article passes along more predictions from people without examining their track records:

"Gordon, author of The Long Wave Analyst newsletters, told the event's audience of 1,500 that he expects the Dow Jones industrial average to plummet to 1,000 based on the idea that economic events repeat themselves in regular sequence every 60 years or so. Sprott, a Canadian hedge fund owner, told the predominantly business crowd that systemic risk remains and that investors should buy gold."