The Untold Reason Why Some Americans Are “Leaving” the U.S. Labor Force


Hardly a month goes by that I don’t hear about someone I know directly or indirectly who is moving from the U.S. to an international destination for a job. This trend was in place before the severe, late 2000s recession hit. 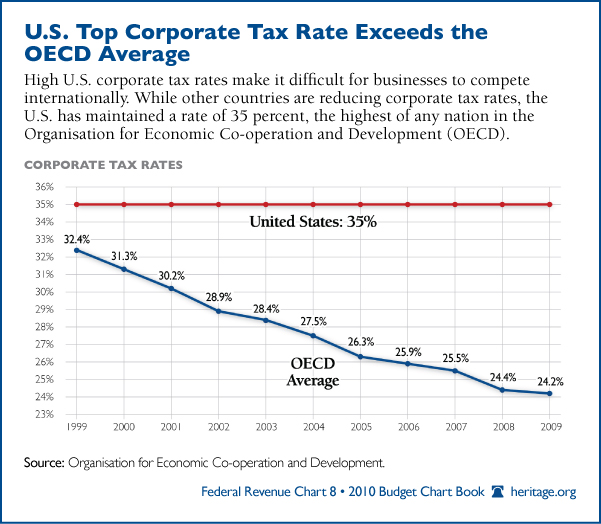 The High U.S. Corporate Tax Rate and The Lost Decade

In the 1980s and 1990s, by contrast, the U.S. was not at a competitive disadvantage in terms of U.S. corporate income tax rates. Check out the longer-term graph below which compares the U.S. corporate income tax rate to the average of OECD countries. The U.S. rate was about in line with the OECD average during the 1980s. During the U.S. economic boom of the 1990s, the U.S. rate was consistently lower. During the 2000s, the OECD average has been consistently lower and the gap widening so that now, the OECD is about 10 full percentage points lower than the U.S. rate. 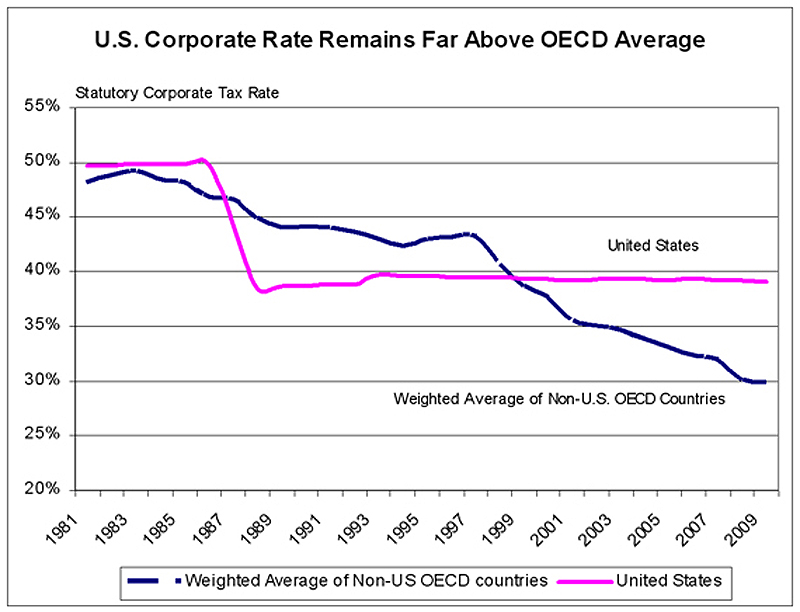 I recently spoke with Curtis Dubay who is a Senior Tax Policy Analyst with the Heritage Foundation about these facts and here are the highlights of his comments:

What This Means for Your Investments

Unfortunately, in all the partisan, political debates, there’s little discussion about what is an “optimal” tax rate on corporations and individuals. Arbitrarily arguing for higher or lower tax rates without context and knowledge about its economic impact is foolish.

As my regular readers know, many countries are growing faster than the U.S., are enjoying far lower rates of unemployment and experiencing robust stock markets. Political ideologues like Paul Krugman who argue that the world is in a depression fail to examine these facts and instead dwell on the shortcomings of the U.S. economy without correctly identifying their real cause (he thinks the path to U.S. economic success will come from more government stimulus spending).

We do know that all other things being equal, if you tax something at a higher rate, you’re generally going to get less of that taxed activity. Relatively high U.S. corporate tax rates leads to lower U.S. economic growth and domestic hiring. That’s Econ 101 and the 2000s are proof positive of that.

Corporations - just like people - can vote with their feet.

Consider that at the individual level, some Americans have chosen in recent years to move overseas and even given up their U.S. citizenship given the prospect of increasing higher-end individual U.S. income tax rates. The Financial Times documented this phenomenon in their article, “Americans who swap passports:”


“At the US Embassy in London, there is a waiting list that none of the officials likes to discuss. On the list are Americans hoping to give up their citizenship, as they seek shelter from the Internal Revenue Service…The backlog at the US Embassy, where no appointments are available until February [six months], stems from a rise in the number of American expatriates living in the UK who have been seeking to escape paying US tax on their worldwide income and capital gains since the simplification of US tax laws in 2008.”


An earlier FT article on the topic found:


“The number of wealthy Americans living in the UK who are renouncing their US citizenship is rising rapidly as more expatriates seek to escape paying tax to the US on their worldwide income and gains and shed their “non-dom” status, accountants say. As many as 743 American expatriates made the irreversible decision to discard their passports last year, according to the US government – three times as many as in 2008.”