Update: Like a dog chasing a moving car, the mainstream media keep harping on Romney not releasing more income tax returns. In the video below, Mark Halperin, who is with two left leaning media outfits - Time and MSNBC - makes revealing comments about how much of the media continues to comply with the Obama team's agenda.

The only thing more humorous than listening to and watching politicians inconsistently (and ignorantly) posture on issues relating to money is to watch the media's lame coverage of said events.

Silly me that I thought Presidential candidate Mitt Romney had put to bed questions about releasing tax returns when he agreed to release his most recent two years' worth of returns. Recently, it has been all over the news media that the Obama campaign and its surrogates are now demanding that he release many years more of his family's tax returns. For a time, nearly everyone in the mainstream media parroted this demand without questioning those who were making these demands and what purpose it would serve.

Congressional leaders like Nancy Pelosi (photo below), House Minority Leader, jumped into the fray when she echoed calls for more years' worth of Romney tax returns be published for all to see.

Then, finally, a news media organization (McClatchy News) actually did some thinking and research on this issue and discovered that of the 535 current members of Congress, a mere 17 of them (that's about 3 percent) have themselves released their own income tax returns! 97 percent of them - including Ms. Pelosi and many other leaders - have not. 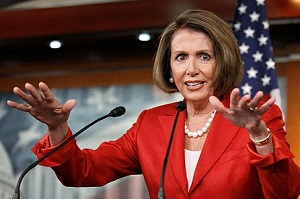 Roll Call, which covers news on Capitol Hill recently documented Pelosi's massive backpedaling on her demand for candidate Romney to release more tax returns once folks started questioning why she and other Congressional leaders had never disclosed their own returns:


"Facing questions about why she and other top Congressional officials won't release their tax returns, House Minority Leader Nancy Pelosi (D-Calif.) downplayed her previous demands for presumptive GOP presidential nominee Mitt Romney to release his, calling the issue a distraction.

As recently as Wednesday, Pelosi had strongly urged Romney to provide further disclosure of his tax returns. But today, while maintaining Romney should release more documents because of "custom" and "tradition," Pelosi said the issue was trivial compared with economic issues.

"We spent too much time on that. We should be talking about middle-income tax cuts," Pelosi said after answering two questions about the issue.

The Minority Leader faced questions about the issue after a McClatchy News report showed only 17 of 535 Members released their tax returns when asked.

Romney has faced increasing pressure to disclose more about his financial history in recent weeks...The former Massachusetts governor has released his 2010 tax returns and has promised to release the 2011 returns when they are available."

As I have said before, we have a real problem of getting enough qualified people to run for high political offices. The pay is poor - the President of the U.S. gets a ridiculously low $400,000 per year. While this may sound like a lot of money to some folks, the leaders in virtually all other fields of work get paid more - in many cases, a lot more. If leading athletes and CEOs get $10 million plus per year, why shouldn't our President?

The abuse and scrutiny that Presidential candidates and their families face is overwhelming and unrelenting. Coupled with the low pay, it's no wonder few qualified folks run.

I really don't see the point for candidates to disclose their income tax returns. What's on a person's income tax return is no one's business except your spouse's and the Internal Revenue Service's (IRS). If someone is breaking tax laws, it's up to the IRS to enforce that - it's not going to be obvious on a tax return published for the public to review.

If someone or some organization needs to verify your financial information with 100 percent certainty, they may require you to complete IRS Form 4506, "Request for Copy of Tax Return." Make note of the fact that in box 5 of that form, there is a space to request that the form be mailed to someone other than you:


"If the tax return is to be mailed to a third party (such as a mortgage company), enter the third party's name, address, and telephone number"


In addition to when you may apply for a mortgage, another time when copies of your originally filed tax returns may be required is when you apply for financial aid. This is done to ensure that the organization is actually getting a copy of what you filed with the IRS. Otherwise, anyone could complete a tax return with whatever information they wished to enter and then simply use that bogus information to satisfy such a request.

The media has completely missed this point regarding tax returns submitted historically by Presidential candidates. Since the returns were not requested through Form 4506 by an independent entity, there's no way of knowing that the published information is what the person actually filed with the IRS.

If we continue this practice of having candidates provide returns themselves - and I do question its value and respectfulness to the candidate's right of privacy - an independent organization should post and handle the release of candidate's returns directly from the IRS.