Are Airlines Ripping Off Consumers with Fees for Checked Baggage?


My regular readers know that with all the blogs and websites producing content about the business world and financial markets, you need to be a discriminating consumer when reading online, especially "free" content.

The website Consumerist, which used to be part of Gawker Media and was bought by Consumers Union, publishers of Consumer Reports in late 2008, is known for taking a snarky, anti-business view that highlights consumer complaints and frustrations.

They recently published a piece entitled, "JetBlue’s Justification For Baggage Fees Demonstrates The Sad State Of Airline Industry" by Chris Morran which caught my eye.

Back in the late 1980s and 1990s, I did a tremendous amount of flying as a management consultant and since that time, I've kept tabs on the ever changing airline industry although I fly less than I used to. Below are the highlights of the baggage fee column followed by my comments.

Late last year, JetBlue announced that it too would be kowtowing to investors’ demands and start charging fees for checked bags. This news did not go over well with many of the airlines’ customers, but JetBlue believes people will get over it… because they really have no other choice.

Speaking with the Wall Street Journal, JetBlue’s head of marketing Marty St. George says that it’s okay for the airline to now charge baggage fees because most of the other carriers do.

“Years ago, every piece of research we did said: ‘Don’t charge bag fees, they are horrible and people don’t like them.’ But every single year bag fees have become less important, and now they aren’t that big of a deal anymore,” explains St. George, who claims that customers are so used to paying the fees that even though JetBlue was known for not having these fees, travelers would pull out their credit cards at the ticket counter just expecting to be charged extra for checking a bag.

So basically, JetBlue allowed the bigger airlines to do the dirty work of really ticking off consumers for 3-4 years until it was beaten into them so frequently that they now expect to be nickel-and-dimed.

St. George contends that customers will come to love the airline again after it reveals its new fares in the coming months, obviously implying that the fees will result in lower ticket prices.

But as I recently pointed out, the airline industry loves to perpetuate this myth that these fees are effectively creating a la carte airline pricing, where you don’t pay for things you don’t use. But if that were true, it would necessarily mean that the airlines would be losing money...

The column is striking. And, the words chosen are revealing. Morran accuses JetBlue of levying baggage fees as "kowtowing to investor demands." I hold some airline stocks indirectly through mutual funds I invest in and don't ever recall calling any of the airlines and "demanding" that they sock it to travelers that check baggage! He makes sweeping generalizations like, " This news did not go over well with many of the airlines’ customers." Really? How could he possible know that? Where's the survey or market research? 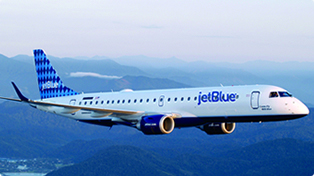 I interviewed Morran by phone to see if I was missing something or misunderstanding where he was coming from. His language by phone was even more extreme and strident. He accused JetBlue and the airline industry of "lying over and over again" and said that their "a la carte argument is a lie." Furthermore, he says the industry "like most other industries is controlled by three or four companies" which he says engage in "collusion" where they play "follow the leader" and implement the same policies and pricing. (In reality, there are actually 10 airlines based in the U.S. and that in 2014 each served more than 10 million customers.)

When pressed, Morran stated that he doesn't think that the airlines should charge for checked bags and should continue to do things the way that they did in prior decades. I pointed out to Morran that airlines used to provide meals without a separate extra charge decades ago and now they generally don't do that but instead offer meals for sale. So, what the airlines are now doing with checked bags is no different.

From a business and customer service standpoint, offering checked baggage as a separate a la carte service that you pay for only if you need it and use it makes complete sense to me. Another way of looking at it is if they charge all passengers the same fee then folks like myself who don't check bags are effectively subsidizing (paying for) those who check a fair amount of heavy luggage.

A la carte pricing permeates other industries and businesses. Would you eat at a restaurant that forced you to pay for dessert and alcohol if you didn't wish those add-ons with your entree? Or, would you patronize a dry cleaner that charged you to clean a business suit every time you brought in some dress shirts only for cleaning? And, how would you feel about your local dentist charging you for x-rays each six months when you only wanted a cleaning?

One final point about the airline industry. Morran told me over and over again during our call how the airline industry was reaping big profits. Simply put, he is wrong about that too. Compared with other industries, airlines make below average profits and the industry's profitability is quite cyclical/volatile. For some historic perspective on the industry's profitability, see The Economist's article, "Why airlines make such meagre profits."

The bottom line is that competition is alive and well in the airline industry. Shopping for lower cost flights is relatively easy to do from your computer. Airlines compete for your business and are not clones of one another. Services, pricing and policies do vary among carriers.